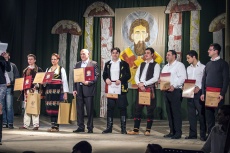 Victoriaoil, a member company of Victoria Group, was presented with St. Sava plaquette by the Serbian society St. Sava for culture and arts from Šid, which traditionally awards meritorious individuals and companies.  St.Sava plaquette is an accolade established in 2000. Victoriaoil received it for donations made to this organization during the past years.

The ceremony in the Centre for Culture and Education in Šid was attended by numerous representatives of local government and clergy, while the plaquettes were presented by the president of the society St. Sava, Mr Miodrag Vujičić.

Victoriaoil continually invests in quality of its products as well as in social community in which the company operates. So far Victoriaoil has supported numerous humanitarian activities on national level, such as Food for Enclaves and Battle for Babies. As a member of Victoria Group, it participated in EUR250,000 donation to the Emergency Centre of Clinical Centre of Serbia for the reconstruction of operating rooms and intensive care unit on urgent urology.  Being among the drivers of economy in the Municipality of Šid, Victoriaoil supports local activities. Only in the past two years the company helped over 30 organizations and institutions, with resources invested in transportation projects, projects for local community development, renovation of cultural and educational institutions, organization of the traditional event Šid’s Summer of Culture and improvement of sport and sports clubs in Šid.